We had a visit planned to our friend, Janette's for the weekend. A visit we always look forward to as we enjoy a good old chat and visit good restaurants each evening. Normally we also visit the local towns and sample their wares - like Melton Mowbray pies and lots of lovely Stilton, so this time we investigated the possibility of Leicestershire vineyards. There are quite a few in the Midlands as it turns out but at this time of year they are not all open. I contacted Ceri at Walton Brook..

and he kindly said we could visit - we were very excited to see another vineyard in a new area!

The vineyard has quite a history. It has been farmed by the same family since the 1890's and during the Great War, the fields here were used by the Royal Flying Corps, the forerunner of the RAF, to protect the Midlands from zeppelin attack. The squadron based here was commanded in 1916 by Captain A T Harris - later in the second World War, known as Bomber Harris.

So in 2008, Ceri, Trevor Eggleston's son-in-law (Trevor being the farmer-in-law!), suggested that as part of their diversification, they should try planting vines - his original idea had been to try a couple of vines in his garden so it kind of escalated! 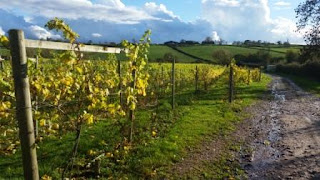 To begin with 2,500 vines were planted: Seyval Blanc, Solaris, Regent and Madeline Angevine. Another story is linked here as the German group who were coming to plant had first of all been to plant the first vines for Llaethlliw vineyard - where we had a visit planned for the following week! Very sadly, one of the vehicles used for the planting was involved in quite a serious accident as it left Wales and as a result these first vines had to be planted by hand!
The following year several hundred more were planted: Pinot Noir, Pinot Meunier and Chardonnay - planning for sparkling! There were problems here in the first winter as the field which drops down to the Walton Brook, turned out to be a frost pocket. As Trevor and Ceri told us - it is a steep learning curve and every area is different. Certainly for the more northern vineyards, they are all favouring Solaris.

This grape is an early ripener so can be picked early - but its downside which we have heard about a lot now, is its rate of growth! It is a true vigorous grower it seems! Even now in the autumn, the Solaris vines are full of vigour.. 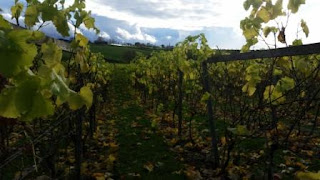 Trevor and Ceri told us so much about their growing experiences - it was very interesting and worthwhile - and very kind of them to give up their time (although they were glad of a break from pressing I think!) 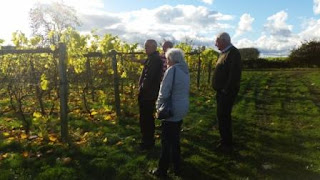 Their planting to date was completed in 2010 with a further 6,000 vines of: Pinot Noir, Pinot Gris (or Pinot Grigio in Italy) and Bacchus. There is much more possibility of expanding further although their next plan is to have their own winery, at the moment their grapes are taken to Eglantine Vineyard near Nottingham for bottling. Still on the vines were some Seyval Blanc, the latest to ripen here... 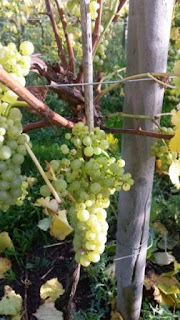 We tasted some though and the decision was to pick - they were sweet and ripe! Think they'll be gone by now!
And great excitement is in the air as they await their soon to be released first sparkling wine - a white and a rosé, the rosé having exclusively used the Pinot Noir grapes and the white using only the Pinot Gris grapes. The sparkling wines in each vineyard we have seen so far are all made using the méthode champenoise, the traditional champagne method but it seems with better results than the French version! We hope to hear from Ceri when this is ready which should be in time for Christmas we all hope!
And so to the tasting! This is always an exciting moment. We tried a little of each of their current wines...Solaris, Seyval Blanc, Bacchus and the Rosé

Although Bacchus is apparently the usual favourite, Chris preferred the Seyval Blanc which had an elderberry type flavour and was very nice, whereas Janette and I preferred the Solaris which was to me delicious - very crisp and citrussy but fruity too. Ceri is very doubtful of a good English red and so they don't have one planned - we said we would let him know when we find a good one and will take a bottle for him! 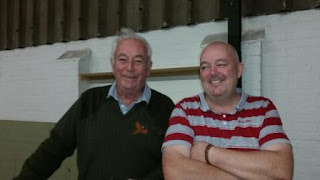 We had spent a wonderful time with Trevor and Ceri. Ceri was very informative not only about the vines but also with his tasting detail. As he said - in the end it is always a question of taste. Walton Brook wines tasted good to us - so hope we'll be back again soon! Thank you both!